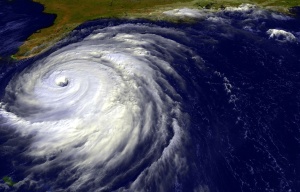 Southeastern US – Reports are starting to trickle in on what actually ended Hurricane Matthew’s reign of terror last week. Hundreds of…uhhh…interesting…Messianic congregants…you know the ones I’m referring to…banded together to simultaneously blow their shofars at Hurricane Matthew, in an effort to get him to retreat. And retreat he did. In what would have been the tekiah gedolah to end all tekiah gedolahs, except Messiah did not return, Hurricane Matthew actually did cease his operations upon hearing the shofar blasts. Rabbi Alan Levine of Kol Mashiach Messianic Synagogue in Melbourne, FL has been a Rabbi for over 25 years and said he has never seen anything like this before; a hurricane retreating after basically being yelled at, in the most obnoxious of ways.

“I couldn’t take that dreadful noise,” Hurricane Matthew said in a recent press conference. “It was like dying cattle. And not even the good kind of dying cattle. Part of my job is to slaughter cows and other living beings, so normally I’m all about that BLEEP, but for real. That noise. Not cool, guys, not cool. I don’t know if I’m getting old or what, like when you think you can still twerk at the club, but really the music is too loud and you just want to be in bed by 9pm. That’s how this felt. I was in the zone, but the shofar blasts just messed up my mojo, so I just gave up and went home to roll into a ball on my couch and binge watch Stranger Things on Netflix and now I just feel like a failure. A big. wet. failure.”

While the hurricane’s feelings were clearly hurt in this whole ordeal, it did save many lives. Still, no excuse to abuse the use of shofars, which are meant only to be blown during High Holidays and when The King returns, and certainly not to be blown in one’s ear during the evening sessions at Messiah Conference. So take your shofars and your tambourines and…oops. Forgot I was writing an article here. Sorry about that. Anyway, as my Dad says, even a broken clock is right twice a day. But a broken shofar is something that will happen if you blow it in my ear again. Wow. This article is getting torrential. Time to board up the windows and evacuate the premises.