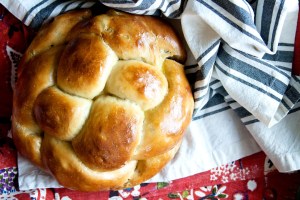 New York City, NY – Presidential candidate, Donald Trump, discovered round challah this week while walking through Brooklyn. Challah, a traditional ceremonial Jewish bread, is braided and only formed in a circle for Rosh Hashanah, the Jewish new year, as a symbol of the continuing cycle of the years and seasons. While anyone baking challah can choose to form it in a circle at any point, it is only found in bakeries and stores in a round shape during the high holidays.

“I love the Jews,” Donald stated in an interview. “All my kids are dating or married to Jews. One of my kids IS a Jew! And I love their bread; I could just eat that all day. But I saw it round this week, like a bowling ball. In fact, I used it as a bowling ball. Why don’t they do this all year? They should really do this all year. We’ll do CH-allah bowling in the White House bowling alley. I’m going to have my servants make me round CH-allah every day for the rest of my life. I love bread. And Jews. Jew bread.”

Trump then went on and on about how he loves Jews and plans to build a wall around all Jewish communities in America to 1) Keep them safe from harm 2) Make them feel like they’re in Jerusalem 3) Keep them from mingling with everyone else. When asked how big the walls would be, Trump simply replied, “They’re gonna be ‘UGE.”