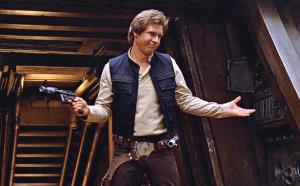 Orlando, FL – In light of the Star Wars craze, Rabbis everywhere are desperate to gain more knowledge or intimately know more about Stars Wars and Rogue One.  So they sought עדַיָ, who they find, through Google, is a character of Star Wars.  While the transliteration was incorrectly spelled “Yoda,” they originally asked for him to speak at the upcoming IAMCS Rabbi’s Conference in Orlando next month.  Finding he was over 900 years old, they felt the trip might be exhaustive, so they sought after the next eldest Jewish Guy, Harrison Ford.

While not Messianic, Harrison Ford said he could understand dying in order to save the galaxy or even just one person, like a son, for example.  He said he is not sure about walking on water, but he has known several Skywalkers, so he thinks his knowledge is broad enough. He is also willing to share many stories and insight to the younger single Rabbis on how to woo young JAPs; Jewish Alderaanian Princesses.  He did warn that a career of smuggling is not the best resume and said, quite frankly, JAPs have big Daddy issues and strange brother sister closeness, and suggested avoiding them, unless they are very rich.

Ford suggested that Star Wars was critical to everyday life, as so many of the younger generations already know.  In honor of the importance of Rogue One, and Star Wars in general, he suggested switching the Manischewitz out for Blue Milk.  He also suggested that all Menorahs replace the candles with miniature lightsabers.  This should draw in young people by the thousands…If not, then you can always try free movie tickets…