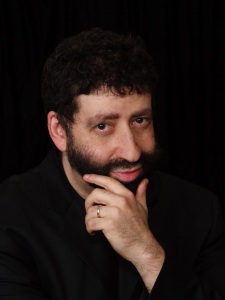 Rabbi Jonathan Cahn has taken the Messianic and Christian worlds by storm with his best-selling novel The Harbinger. But now he seeks to conquer another realm – the realm of health and nutrition. Cahn’s new diet book, The Mystery of the Fatted Calf, was released this week in Christian bookstores nationwide, and it has absolutely everybody talking.

“Throughout the Scriptures, the fatted calf appears as a symbol of God’s favor,” said Rabbi Cahn in a press release about the book. “When God and His angels visit Abraham in Genesis 18, the fatted calf is the meal which Abraham prepares for them. In the parable of the prodigal son, the father gives an order for the fatted calf to be prepared as a celebratory feast. It is a symbol of our communion with The Creator, a feast that consummates our reconciliation with our God through acceptance of the Messiah. In this book, I combine in-depth Biblical study with the latest in cutting-edge nutritional research to unlock the mysteries of this marvelous wonder food which God has provided, and reveal how we can utilize it to maximize our health and even increase our lifespans.”

So, is Cahn’s revolutionary new diet plan the real deal? Well, obviously it will take a while before we can judge the long-term effects, but early reviews sound promising. “This book is a revelation, plain and simple,” writes Greg Whitman of Christian literary review journal Holy Handwriting. “[Rabbi] Cahn has an immense gift for finding previously undiscovered connections between passages and tying them together into a cohesive whole, and this book is perhaps his crowning achievement in that regard. Verses which once seemed unrelated blend effortlessly and seamlessly together as he delves deeper into the Word, backing it all up with a wide array of dietary studies to emphasize the fundamental unity of Scripture and reveal God’s divine will for our diets. Long live the fatted calf!”

Jake Liebowitz of The Messianic Gazette was similarly enthusiastic. “While it can be easy to get overwhelmed by the whirlwind of numbers and references that Rabbi Cahn throws at you,” he writes, “it’s hard to argue with the results. The fatted calf is truly God’s greatest dietary gift to man, and one that all followers of Messiah should feel blessed to receive. If I wasn’t a vegetarian, I’d be eating at least a steak a day.”

However, Cahn hasn’t won over everyone just yet. While Michael Weisman of Messianic Health Review praises the book’s wealth of information, he maintains a bit of skepticism about the diet. “Sadly,” he writes, “for all the complexity of Cahn’s bold new dietary theory, I still find myself unconvinced by his conclusions, and certain sections – the part about dietary adjustments during blood moons, for example – feel like a bit of a stretch. Still, Rabbi Cahn definitely provides a massive amount of raw data to sift through, and the end result leaves any reader with a lot to think about. The theory may well have value, and certainly merits further investigation. I’m just saying don’t bet the whole hog (or calf, as the case may be) on it until further studies confirm the esteemed Rabbi’s findings.”

Regardless of Weisman’s reservations, plenty of believers seem quite eager to test out Cahn’s groundbreaking new dietary concepts. The Mystery of the Fatted Calf has leapt to the top of bestseller lists nationwide, and sales of beef and steak have shown a sharp spike as thousands of faithful embrace what Cahn calls “the chosen meal for the chosen people.” As for the author, he insists his work on his theory is far from over. As he gears up for a whirlwind speaking tour in support of his new book, the Rabbi pledges to continue to refine his work, incorporating the latest dietary research and newly discovered obscure Biblical connections into his messages to ensure the most accurate possible information.  After all, when it comes to radical new diets, you have to be careful – there’s a lot at steak.