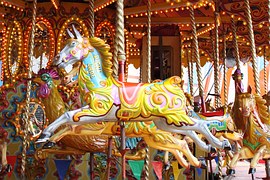 Phoenix, AZ – After much speculation about the new Messianic Jewish theme park Yeshualand potentially opening a location near Phoenix, Jonathan Bernis, President and CEO of Jewish Voice Ministries International has confirmed that there will, in fact, be a Yeshualand location opening in Arizona, just in time for holiday vacations in December.

After months of searching, Bernis says they were finally able to secure nearly 400 acres of land about an hour outside of Phoenix. In addition to all the great features of Yeshualand Ethiopia, Yeshualand Arizona will have new rides and attractions, including The Mikveh Machine, a quicksand pit, The Jude and Jennifer Carousel-o, and a giant lego firewalk.

The theme park will also have extra stages and a campground in the hopes that AMF 2.0 will choose to hold their event there, as they can technically hold it in Arizona and still be called “AMF.” At the very least, Bernis hopes The Havdalah Spice Girls will have a residency at the park. Bernis said the campground will also be a haven for travelers during Sukkot, starting in 2017, and said those wishing to build their Sukkahs there will get a special discount, in addition to a Sukkah building contest and other fun activities specific to the holiday.

Additionally, there will also be a one of a kind bible themed McDonald’s that will offer such items as Jonah and the Filet-O-Fish, Adam’s McBeefRib, the McYeshua, and the Big Maccabee. Bernis believes that having The Golden Arches on premises will attract the annual Golden ARCH Leadership Summit to Arizona, rather than holding the event at the ever unpopular Rosen Plaza Hotel in Orlando.

Annual passes to Yeshualand Arizona will be available to the public starting in November and will start at $1800 per family up to six; quite a metziah! Stay tuned for more information about Yeshualand Arizona and other locations to come.