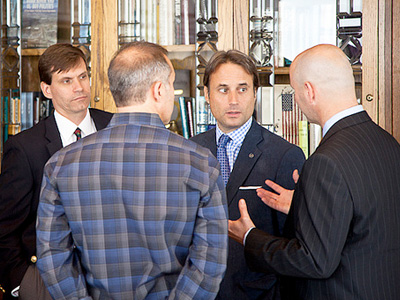 Doctors and rabbinical authorities conferred long into the night at the recent UMJC Midyear Leadership Meeting in Richardson, Texas due to an unprecedented outbreak of the Lashon HaTov (roughly, Good Speech) Virus.

Participants grew uneasy as it gradually become apparent they had lost the capacity to make patronizing comments, veiled criticism, and sarcastic barbs about other Messianic Jews present or absent from the meeting.

Try as they might, long-term bad-mouthers found themselves unable to speak disparagingly even of shofar blowing pseudo-Hasidim, or of others festooned in day glow talleisim, or of the intellectual crowd normally dismissed as too high up the mountain to do anyone any good.  Someone tried to click his tongue at the mention of Mark Kinzer’s name and found his tongue sticking to the roof of his mouth.

Those who sought to criticize Jews for Jesus, Tikkun, MJTI, or CJF Ministries (formerly known as the Christian Jew Foundation) found themselves unable to do so. “That’s when panic set in,” reported Monique Brumbach, Executive Director of the Union. “I even saw someone walk up to David Chernoff of the MJAA and tearfully apologize that he couldn’t make any innuendo-laden comments this year.

Even damning with faint praise proved impossible, and the outbreak grew so severe that conference attendees returned trembling to their rooms, many of them choosing to lie down in the hopes the affliction would pass.

The next morning, Russ Resnik was reassuring everyone at breakfast, “This too shall pass!” Someone at the far end of the room shouted out, “You’re an idiot, Resnik!”  After a pause, people started laughing. It was the laughter of relief. Indeed, things were getting back to normal.