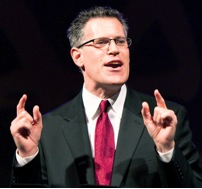 Grantham, PA — The Messianic Jewish Alliance of America announced this week it would begin hosting Friars Roasts at its annual Messiah Conference, which will take place at Messiah College in Grantham, PA next week. Messiah Conference is notorious for showcasing the talents of Messianics, from dancers to musicians to authors, but the one thing that has long been missing from Messianic pop culture is organized comedy, and Messiah Conference has set forth a plan to change that, by publicly making fun of its leaders.

“We’ve finally reached a point in our culture where we feel the Messianic community is ready for organized Messianic humor,” said IAMCS Director of Operations, Rabbi Joel Liberman. “Since all Messianic Rabbis are struggling comedians, why not publicly roast each other? We have close to 55,000 people view the livestream of Messiah Conference every year, so this is a great way to unveil Messianic comedy to the world…and it sure beats asking that awful Messianic Meow to speak at Conference.”

The first annual Messianic Leader’s Roast will take place during the plenary session on the final evening of Messiah Conference, just before the Klezmarians perform to close out the conference. MJAA General Secretary and founder of Lamb, Joel Chernoff will be the first ever roastee and we expect to see jokes from such Rabbis as Matt Rosenberg, Joel Liberman, Jonathan Bernis, David Chernoff, and everybody’s favorite prankster, Rabbi Kevin Solomon. If you can’t make it to Messiah Conference this year, you’ll be able to watch all the evening sessions and Saturday morning Torah service at http://messiahconference.org/live/

When you’re a Jewish follower of Jesus, this is how Amazon advertises to you.
Repentance is in play 365-366 days a year.
Just remember, fear is not from The Lord.