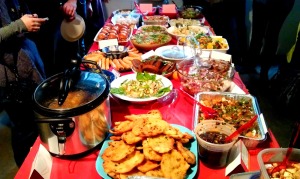 With Chanukah and Christmas approaching, if you attend religious services somewhere, you are bound to have at least one potluck to attend in the near future. If you’re reading this, I would assume that, like me, you have spent at least part of your life bouncing back and forth between synagogues and churches. Maybe you’re unsatisfied with your local Messianic congregation, maybe you didn’t discover Messianic Judaism until later in life and are struggling with where you fit in, or maybe you are in a relationship where one of you is Jewish and the other is not. Whatever the case may be, you know that churches and synagogues, regardless of the sect or denomination, are vastly different from each other.

Though all four of my Grandparents were Jewish and my DNA test came up approximately 98.5% Ashkenazi, I was raised in a very Gentile area. Being Jewish in Mundelein was like being gay in 1953. You probably weren’t the only one, but nobody talked about it. And if you did talk about it, you were treated like you had Leprosy. So it was much easier to go to church and live my life as a Christian. It wasn’t until I was well into college that I found my way back to Messianic Judaism. And even then, I spent quite a while going back and forth between synagogues and churches. Because of this, I have been able to observe many potlucks, in both types of settings, and I am going to share with you what I’ve learned from these experiences:

When it comes to church potlucks, mayonnaise is key. That’s right; mayonnaise. Gentiles love mayonnaise based dishes. It doesn’t matter if it’s chicken, potatoes, macaroni, or old shoe laces. If it’s swimming in mayonnaise, they will eat that #@%! up. And by eat it up, I mean figuratively, of course. Don’t expect any food you bring to a church potluck to actually get eaten, despite the fact that you don’t have to worry about picky people, like you would at a Jewish potluck. Gentiles love to talk about eating food more than they actually love eating it. As a Jew, I can’t figure this one out, but we’ll get to that later. I’ve been to many a Gentile potluck and only once have I had something completely finished off, and that is my ‘Magic Guacamole.’ (And don’t think you’re getting the recipe, because that one’s gonna cost you). Everything else has no more than a few bites taken out of it, by the time the event ends. It doesn’t matter how good it is, how much people tell me they love it, or how much effort I put into it, it will not get eaten. I’ve given up. Why should I put effort into making food for people that won’t eat it? The last time I went to a potluck at a church I wound up just bringing a tub of cookie dough and stuck a few spoons in it. It was just as big of a hit, and I didn’t care as much when it didn’t get eaten.

Jewish potluck culture is pretty much the exact opposite of church potluck culture. First of all, every single person at a Synagogue or other Jewish function’s potluck is lactose intolerant, or can’t have gluten, or is allergic to something else, and everyone is incredibly picky and has certain things they absolutely will not eat. On top of this, you have varying levels of Kosher observances. Most Jews do not eat pork or shellfish, some will not mix meat and dairy, some will only eat food that is Kosher certified. Oy, there is so much to remember. Despite this, you can rest assured that your food will be eaten and you will not bring home anything more than a dirty dish. Unless of course what you made was terrible. In which case, I suggest you just stop at the store and pick something up before hand next time, instead of making it yourself. I have also been to many Jewish potlucks and I have never once brought home leftovers, which is amazing, because to a Jew, it is a great insult when people do not eat our food. There was once an almost of leftovers, however, when I brought a double batch of my mandel bread to a mezuzah hanging, but people found Ziploc bags and took the leftovers home with them! My synagogue has also started providing to-go boxes for everyone after the Yom Kippur break-fast. The only thing Jews love more than fresh food is leftovers. And, remember, the theme of every Jewish holiday is, “They tried to kill us, we won, let’s eat.” I don’t know if I’ve ever been to a Jewish function that didn’t revolve around food. Weddings, funerals. In fact, most Messianic synagogues even serve food after all of their services, including on Shabbat. And, from personal experience, I even gain weight during Yom Kippur, which involves a 25 hour fast, because it begins and ends with stuffing your face!

•Church potlucks: They say they will eat anything, especially if it’s got mayonnaise in it, but they don’t actually eat anything after all

•Synagogue potlucks: Work around food allergies and dietary restrictions and all of your food will be eaten

2 thoughts on “Church Potlucks vs. Synagogue Potlucks: A Holiday Guide For Those Who Are Straddling Two Worlds”

Whole 30 doesn’t just work for people; it also works for Bibles!
Because when I think Havdalah needs, I go straight to Bed Bath and Beyond!
How many things can you find wrong with this ad? I’ll start: “Hanukkah Advent calendar.”