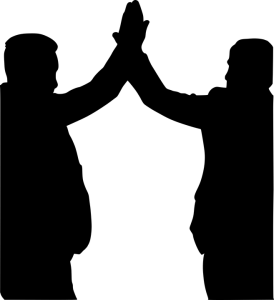 Amarillo, TX — Alarming news from Messianic Congregation Tikvat Shalom in Amarillo, TX, after a worship leader was rewarded with a high five for sweeping a rape under the rug. Jenny Morgandorfer, who plays guitar and sings with the worship band every Shabbat, was out to lunch with another congregant, who informed Jenny that she had been raped by a member of the prayer team, after giving him a ride home last week, and was too afraid to go to the police. Jenny advised her she did the right thing by not going to the police, as it’s best to keep things quiet in this situation. The man was already on the national sex offender registry, and reporting this to the police would send him to jail. Not wanting to lose him from the prayer team or let anyone find out that he is already a sex offender, Miss Morgandorfer went directly to Rabbi Milt Schwartzberg to apprise him of the situation, at which point Schwartzberg high fived Morgandorfer for the decision she made at how to handle the quandary.

“She dun good,” Rabbi Milt said to himself, in his own head. “She dun real good. Look, when it all comes down to it, this is the Bible Belt. And not only is it the Bible Belt, we’re a Messianic congregation. It doesn’t matter what’s actually happening within these walls, it only matters what appears to be happening to the rest of the Messianic movement. If the wider community doesn’t see us as spotless, then we’re doing something very very wrong. Nevermind if we’re actually doing something wrong; I just want to be able to make it look like everything is okay when I see my peers at the conferences we attend together. And anyway, Yeshua said, ‘Let the one who has never sinned throw the first stone.’ And they’re all sinners too, so who are they to judge us? Who is anyone to judge us? We’re fine. It’s fine. This is all fine.”

At press time, Tikvat Shalom continues to operate under the pretense that everything is okay, and all attendees of their congregation have done no wrong and have experienced or caused no trauma.

*******If you know of any affiliated Messianic Congregations where some or all of the leadership is covering up rape or any other kind of sexual, physical, spiritual, verbal, or other type of abuse directed at you or anyone else, and you are not comfortable reporting it yourself, let us know and we’ll report it to the affiliated organization for you.*******

Whole 30 doesn’t just work for people; it also works for Bibles!
Because when I think Havdalah needs, I go straight to Bed Bath and Beyond!
How many things can you find wrong with this ad? I’ll start: “Hanukkah Advent calendar.”