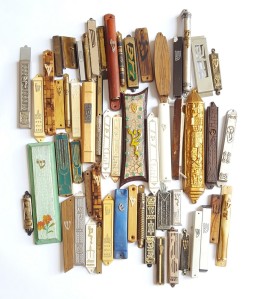 Lincoln, NE — After a local Judaica store offered a going-out-of-business liquidation sale, Rabbi Gerry Barry of Beth Jesus House of The Lord in Lincoln, Nebraska, made sure to take advantage of the clearance prices. Barry cleared out the store’s entire inventory of mezuzah cases, as the store promised an extra discount for anyone with the chutzpah to do so.

“I don’t know why Lincoln’s only Judaica store would go out of business in the first place, but I was more than happy to purchase 720 mezuzah cases at only $2 a piece,” Rabbi Barry explained. “Now that’s a metziah if I ever saw one! Initially I had no plan for the mezuzot, but at those prices, I simply could not pass up the bargain. Now that I have them, the only thing I can think to use them for is trick-or-treaters. I’ll be honest, I HATE Halloween! It’s from HaSatan and I usually hide in my basement every October 31st and turn all my lights out, but what else am I going to do with 720 mezuzah cases? At least this way the children have something meaningful and not just an extra way to rot their teeth. What little boy or girl in Nebraska wouldn’t want a free mezuzah case?! They’ll have to get their own Kosher scroll though; I’m not made of money after all!”

Rabbi Barry says he will be handing out the mezuzahs at his house tonight from 4pm-8pm; the town’s trick-or-treating hours. He said any child dressed as a witch, the devil, or Harry Potter will be given an extra mezuzah case, as well as some anointing oil.

Love The Meow? Click here to partner with us!