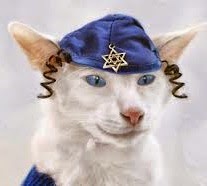 Murca – If you’re an adult that has ever been to a Messianic conference or visited a new congregation, odds are you’ve had at least a few people ask you if the person of the opposite sex standing next to you is your husband or wife. While this mostly affects those of the millennial generation, people of all ages have been mistaken for spouses. It’s a common enough occurrence that something needs to be done about it.

“I’ve been through this myself,” said Messianic Meow Creator, Jami Robins. “It’s happened so many times: I was asked if my boyfriend was my husband, I was asked if my brother-in-law was my husband, I was once even asked if my DAD was my husband, just because he was sitting with me during Shabbat services at a UMJC Conference. NO! But the final straw for me was when someone assumed I was my Rabbi’s wife because I was with him in the marketplace at Messiah Conference. ENOUGH. I’m tired of this happening and I had to do something about it. So now we’ve got these t-shirts that people can wear to conferences that simply say on them ‘No, that is not my husband’ or ‘No, that is not my wife.’ There will be no question about it and it will save everyone embarrassment. Yes, you want us to marry other Messianics, and that’s great, but some people just aren’t married to each other. In fact, MOST people aren’t married to each other.”

The new T-shirts will be available online and at The Marketplace at all Regional and National UMJC and MJAA Conferences. Shirts will be $30 individually, with a discount for bulk orders. You will also be able to receive one of these shirts for free with a donation of $18 a month or more through The Messianic Meow Patreon web site. Robins says these shirts will hopefully eliminate the need for older Jewish women to go around asking people they don’t know if they are married to each other. She also said what you’re reading right now is literally an article of clothing.