Philadelphia, PA and Nashville, TN — Interesting news this week out of the Messianic music scene, as every Messianic recording artist simultaneously changed their name to Shae. In an effort to come together as one, in our very divided community, the musicians opted to make a very bold statement to the world, by all taking on a shared name.

“Beckah Shae was the first, but then Sharon Wilbur started going by Shae Wilbur, which was ‘unrelated’ to Beckah’s name, of course,” explained Nate Benjamin, now Nate Shae, in a press release. “As Jews we’re supposed to be set apart, and as Messianic Jews, well you know…We’re REALLY set apart. But sometimes our music doesn’t set us apart from Christian artists, so if we all have a common name, then everyone will know exactly Who/what we represent.  Besides, when you’re as masculine as I am, sometimes you need a little help showing your feminine side. And what better way to do that than by using a girl’s name?”

Shae, which is Hebrew for “unique” or “one of a kind,” is gaining popularity on the Billboard Top 100 Baby Names Chart, thanks, mostly, to Messianic artists. Artists, such as Paul Shae, Joel Shae, Joshua Shae, Shae Pearce, Heartcry of Shae-vid, Blue Mo-shae-ic, Shae Sol, How to Shae, and Shae-mie Hilsden. At press time, Marty and Misha Goetz are both still on the fence over exactly where to fit “Shae” into their names, as ‘Shae Goetz’ is too close to the derogatory Yiddish term for a Gentile male. 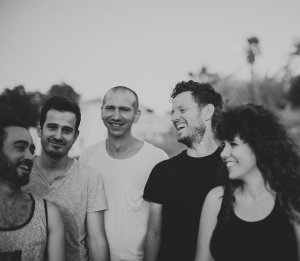 Tel Aviv, Israel — Messianic Judaism’s favorite band, MIQEDEM, announced last week they are working on their second album. After exploding to Messianic fame in the last year, including a US tour, the demand is high enough to record a sophomore album just a little over a year after releasing their debut album. The Messianic world is waiting with bated breath to see what Jamie Hilsden and his crew will come up with next.

“I’ve been part of many many many Messianic bands and MIQEDEM has found the greatest success, by far,” lead singer and guitarist, Jamie Hilsden, said in a video on MIQEDEM’s Indiegogo page. “People love to listen to our songs on repeat. In fact, when we played the UMJC conference in July, the crowd wanted us to keep going, but we were out of songs. So we just went through our album again and everyone loved it. I don’t know if they even noticed, and I think it’s because they don’t understand what we’re singing about, because American Messianics don’t understand Hebrew. So after that we realized we could probably release a greatest hits album already. We’ll get money from selling two albums and we don’t even have to write any new material. It’s a win-win situation.”

MIQEDEM is raising money to record their second album, which will include every song from their first album, plus Elohim Lanu and Kol HaNeshama. If you’d like to help MIQEDEM reach their goal of $23,200 to record their new album, you may donate here: www.indiegogo.com/projects/miqedem-album-2#/

Tel Aviv, Israel – The ever talented Messianic musician, Jamie Hilsden, announced this week he was starting a new band. Hilsden, who is currently head of the Israeli band MIQEDEM, has previously been the music director of King of Kings Community in Jerusalem, and the head of previous bands, “Jamie Hilsden and the Band From the Land,” and “Min Ha’Maayan,” among others. The new band, “Chadash Kedem,” which roughly translates to “New Old,” will debut after the upcoming high holidays at a concert at Israel’s only Messianic Kibbutz, Yad Hashmona.

“Nothing’s wrong with MIQEDEM,” said Hilsden, in a recent interview. “We’re still going very strong. I just like to make sure I change the name of my band every year or two. Chadash Kedem will still have the same members as MIQEDEM and we’ll still be playing the same songs you love, from our debut album, as well as songs I’ve written for previous bands that were almost the same as this band. It’s a new band, but it’s also the same. But it’s not the same, it’s new. You’ll see.”

Chadash Kedem also features musician, Shai Sol, who rose to fame in the Messianic community by appearing on Israel’s most popular televised singing competition “HaKochav Haba” (The Next Star) and publicly telling the judges of her belief in Yeshua, during her audition. Chadash Kedem will include all the musicians and songs from MIQEDEM. Their music can be heard here.

Murca – Nearly every recording artist in the Messianic movement has come together, in the style of live aid, to record a song to raise funds for the repeated droughts in Israel. In America, we pray for rain to stop, but in Israel they pray for it to start; perspective. The song “It Shall Rain Over All the Earth” was recorded over the course of two months and is expected to be released between Sukkot and Passover, when God causes the wind to blow and the rain to fall.

The new single will be available on iTunes, mjaa.org, umjc.org, jewsforjesus.org, and jewishvoice.org for $10 and 100% of proceeds will go towards helping make it rain in Israel. The group calls themselves “It’s Raining Mensches” and hopes to be able to perform together at AMF 2.0.