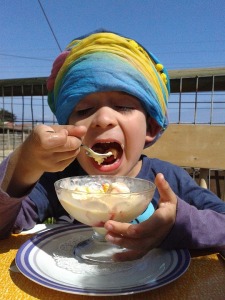 Grantham, PA – A new study from The Messianic Behavior Research Institute suggests that more ice cream is consumed per capita within the community of the Messianic Jewish Alliance of America than any other religious organization in the country. The study took place after a record number of IAMCS Rabbis were found to be searching WebMD for “Cancer caused by brain freeze.”

“Nobody is actually able to pinpoint how this ice cream custom began,” said Dr. David Matzah of the Messianic Behavior Research Institute. “However, we believe it started with the soft serve machine at Messiah College. The MJAA ice cream consumption was exacerbated by the machine being out of service for years during Messiah Conference, which caused a scarcity effect. Our other theory is because they are so Holy Spirit focused, they may feel that eating ice cream everyday is like a permanent Shavuot. Either way, it appears to be subconscious, as no one can actually explain why they eat so much ice cream.”

The mass ice cream consumption does seem to be confined to members of the MJAA community, as opposed to the entire Messianic community. Whenever the IAMCS/MJAA Rabbis get together they have ice cream socials, contrary to the UMJC Rabbis who smoke cigars at their gatherings. The study also concluded that the Messianics who consume ice cream daily are sadly found to attract more mosquitoes in humid climates, as their blood is made up of 88% sugar.